This is a list with important conferences and events in the field of ethics of technology. If you think your event should be listed here, please contact us at events@ethicsandtechnology.eu. 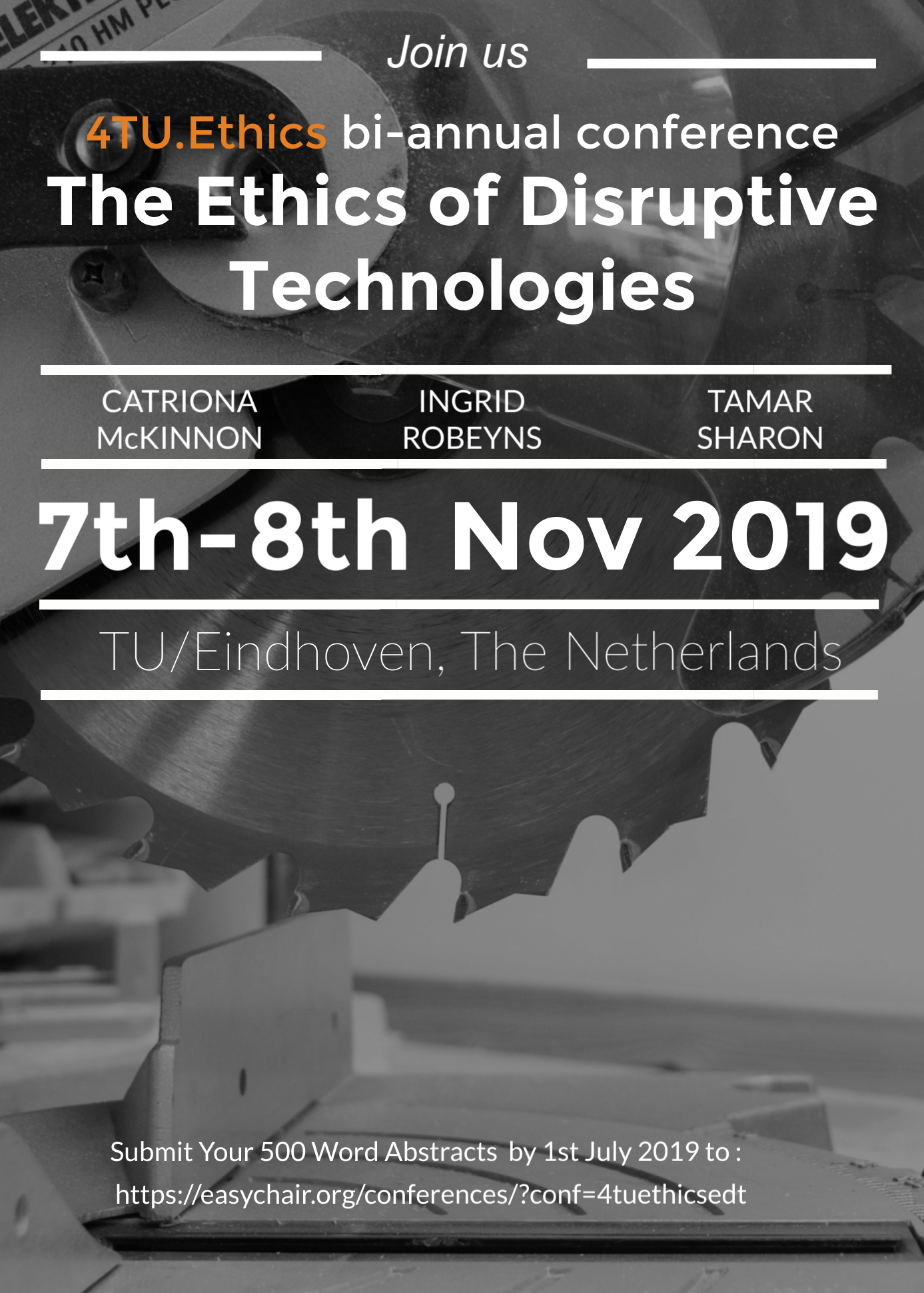 The 4TU.Ethics Bi-annual Conference will take place on the 7th-8th November 2019 at Eindhoven University of Technology, the Netherlands. Registration is now open so please join us by registering here:

Throughout history, technology has been a driver of social change. The technologies of the industrial revolution played a crucial role in shaping modern society, and society has since then continued to be shaped by technological innovations. The conference focuses on technologies that will not just change specific domains or practices for which they were designed, but that will change our life in a much broader sense. They are called socially disruptive technologies (SDTs). SDTs transform everyday life, social institutions, cultural practices, and the organisation of the economy, business, and work. They may even affect our fundamental beliefs, rights, and values. Historical examples of such technologies include the printing press, the steam engine, electric lighting, the computer, and the Internet. Modern examples include digital technologies, bio- and brain technologies, and environmental and sustainable technologies.

Few will contest that novel technologies raise ethical questions that require ethical reflection and guidance. But a key problem in the case of SDTs is that these technologies are also challenging the very concepts and values that we normally appeal to in our ethical thinking. That is why normative frameworks are so important: which values and normative principles should guide the development and introduction of SDTs, and which benefits do we want for individuals and society?

The new generation of Socially Disruptive Technologies has a number of characteristics. First, it promises almost complete control over atoms, bits, genes, and neurons, allowing for everything to be reconstituted or redesigned, including human beings. Second, it is characterized by a convergence of technologies that is blurring the lines between the physical, digital, and biological spheres, resulting in new technologies at the intersection of information technology, biotechnology/biomedicine, nanotechnology, and neuroscience/cognitive science, such as synthetic biology and brain-computer interfaces. Finally, these technologies emerge in the context of a number of grand societal challenges, such as combating climate change and meeting the UN Sustainable Developments Goals (SDGs), which will actually require a range of technological and societal trans­formations.

The stakes are high. These new SDTs could bring great benefits to our society: opening up new medical perspectives, enabling new forms of political participation, or contributing to the solution of our sustainability problems. But they could also bring great harm if not properly developed and implemented (Jasanoff, 2016). They could curtail our autonomy and privacy, damage our ecology, and exacerbate divisions and inequalities in society. That is why normative frameworks are so important: which values and normative principles should guide their development and introduction, and which benefits do we want for individuals and society?

There are three sub-themes of the conference. Each of these sub-themes focuses on a number of key concepts that are being challenged by these socially disruptive technologies.

The conference will have a track devoted to each of these subthemes and a fourth track called “Ethics by Design” exploring how ethical frameworks addressing these issues can used to tackle ethical concerns in design and development processes of SDTs.

Design for Values approaches have flourished in recent years, following the pioneering work of Batya Friedman and her associates who have advocated, since the 1990s, the approach of value-sensitive design. Recently, the approach has captured the attention of industry, policy makers and research funders, in particular the European Commission (EC) .The term used by the EC is “Ethics by Design”, defined as the implementation, starting from the beginning of the design process, of ethical and legal principles and is now implemented in the general Ethics Review protocol used by the EC in Horizon 2020 funding scheme, and is set to become a required element for new project proposals in the Artificial Intelligence funding scheme.