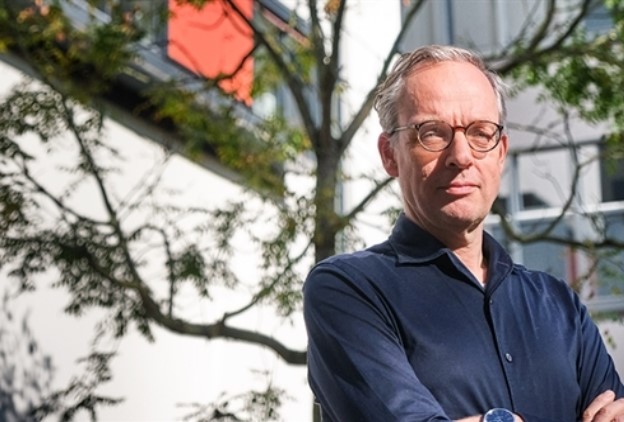 The Executive Board of the Wageningen University has appointed Prof Dr Vincent Blok MBA as professor holding a personal chair in Philosophy in the Social Sciences Group. The appointment is effective from 1 January 2023. In his research Blok looks at how disruptive technologies such as Artificial Intelligence (AI) are changing our understanding of humans and the world we live in.

Vincent Blok (1970) studied philosophy at Leiden University. There he obtained his PhD in 2005 with a thesis on the philosophical method of the philosophy of technology of Martin Heidegger and Ernst Jünger. After his PhD, Blok worked as CEO of the Louis Bolk Institute, an international research institute in the field of organic and sustainable agriculture and healthy nutrition.

In 2010, Blok became an assistant professor at Wageningen University & Research (WUR). First, he was attached to the Business Management and Organisation chair group, providing research and teaching on the intersection of business ethics and responsible innovation. His research group specialised in the ethical aspects of innovation in the private sector, and is currently one of the leading authors in the field of Responsible Research and Innovation (RRI) in the private sector.

During 2016-2019, Blok made the switch from Business Management and Organisation to Philosophy. He focuses on philosophical and ethical questions surrounding new and disruptive technologies in the life sciences (AI, Digital twins, biomimicry). In his research, Blok takes a phenomenological perspective to reflect on the socio-ethical impact of disruptive technologies on humans, animals and society and the way they live together.

He is currently leading a major NWO project on the ethical, legal and social aspects (ELSA) of Artificial Intelligence in sustainable food systems. Digital technologies such as AI have enormous potential to contribute to the sustainability of food systems, but also evoke resistance, for instance around the fundamental freedom and autonomy of producers and consumers, around the consequences for employment, and around the increasing dependence of businesses in the food chain on a few larger technology companies. To capitalise on the potential of AI to contribute to sustainable food systems, the ELSA Lab aims to develop responsible and human-centred AI. In doing so, the ambition is not only to critically reflect on the negative and unforeseen aspects of AI on humans, animals and society, but also on the constructive contribution that responsible AI can make to sustainable food systems. In the ELSA lab, several WUR chair groups are working together to experiment with integrating ELSA aspects into the design of responsible AI.

His group also investigates the changing meaning of fundamental concepts in the life sciences – life, nature, autonomy etc. – under the influence of new and disruptive technologies such as AI, synthetic biology etc. For example, our understanding of human intelligence, agency and freedom is changing under the influence of technological developments such as Artificial Intelligence and call for reflection on the relationship between human and artificial intelligence in different practices.

Besides his work for WUR, Blok is director of the 4TU Centre for Ethics of Technology graduate school and he coordinates the nature research line of the Ethics of Socially Disruptive Technologies research programme, an NWO-funded gravitation programme in which the technical universities (Delft, Twente, Eindhoven and Wageningen) and Utrecht University collaborate.

Blok has published several monographs, including Ernst Jünger’s Philosophy of Technology. Heidegger and the Poetics of the Anthropocene (Routledge, 2017), Heidegger’s Concept of philosophical Method (Routledge, 2019), The Critique of Management. Toward a Philosophy and Ethics of Business Management (Routledge, 2021), and From World to Earth. Philosophical Ecology of a threatened Planet (Boom, 2022 (in Dutch). Blok has also published in a large number of renowned scientific journals, including Environmental Values, Synthesis, Philosophy & Technology, Journal of Cleaner Production and Science.

More information about Vincent Blok can be found here.